How do differently aged couples experience marital satisfaction?  Remarkable findings are derived in the just available and freely accessible lead article in the Journal of Population Economics:

GLO Fellow Wang-Sheng Lee is an Associate Professor in the Department of Economics at Deakin University. Wang received his B.A. from Colby, his M.A. from Michigan and his Ph.D. from Melbourne.

GLO Fellow Terra McKinnisch is a Professor in the Department of Economics at University of Colorado Boulder. McKinnisch received her B.A. from University of Richmond, and her MS and her Ph.D. from Carnegie Mellon University.

The Journal of Population Economics is the leading academic journal in economic demography, the Global Labor Organization (GLO) is one of the organizations supporting the Journal. GLO President Klaus F. Zimmermann is the Editor-in-Chief of the Journal:  “We thank the brilliant authors for an excellent analysis of a very timely question with thought-provoking insights and the article Editor,  Alessandro Cigno, University of Florence, with his anonymous academic referees, for their important work. The study uses the famous and reliable Australian Hilda panel data set administered at The Melbourne Institute, University of Melbourne.”

Here are the core findings:

Both women and men likewise are more satisfied with younger marital partners and less satisfied with older ones. Marital satisfaction for a younger partner which is initially higher than for similar aged couples declines relatively with marital duration and converges within six to ten years of marriage. This is explained by the hypothesis that differently aged couples are less resilient to negative shocks compared to similarly aged couples.

Controversial in the literature – important and open for further debate! 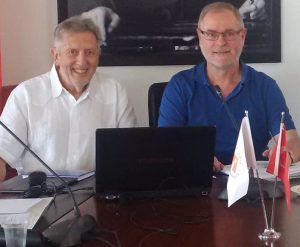 For the complete new issue of the Journal of Population Economics see the outline and the link to the single articles below:

Journal of Population Economics. Volume 31 Number 2 is now available! Access the articles through the link.

The Global Labor Organization (GLO) is pleased to present the table of contents alert for a new issue of the Journal of Population Economics. Volume 31 Number 2 is now available online.

Ildefonso Mendez & Gema Zamarro: The intergenerational transmission of noncognitive skills and their effect on education and employment outcomes

Journal of Population Economics. Volume 31 Number 2 is now available! Access the articles through the link.