How to keep high skilled manufacturing jobs to stay in Melbourne and Adelaide?

As Haisken-DeNew reports, “The Australian auto assembly industry will be closing by October 2017. That means some 7000 workers not only in the primary assembly plants, but tens of thousands also in the entire supply chain and further ripple-on effects. This impacts negatively on Melbourne and Adelaide greatly where the industry was concentrated. In order to keep employment in these cities, we need to focus on developments that will provide incentives for high skilled manufacturing jobs to stay in these cities.”

“‘Smarter Energy’ offers these opportunities. Smarter Energy uses (only now very cheap) Lithium-Ion batteries to store electricity in the evenings when there is excess production of electricity, which can then the next morning be reintroduced into the grid to provide additional capacity and stabilise the grid. This will also help us reach our clean energy targets and reduce our reliance on fossil fuels. This “Smarter Energy” idea is currently being implemented in Toronto, in part by former auto industry workers and engineers! This is happening NOW in Canada. Australia needs to learn from Canada and implement this in Australia to keep employment in the former industrialised cities of Melbourne and Adelaide, and launch them into the next century of growth, jobs, and environmental protection. This is a win-win for all. The latest South Australia announcement of the Tesla super battery being installed demonstrates proof of concept. We need a consortium of auto companies, coal companies, universities/research organisations and government, to come together to ensure that this happens!” 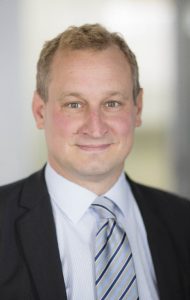 Haisken-DeNew during his speech in Melbourne 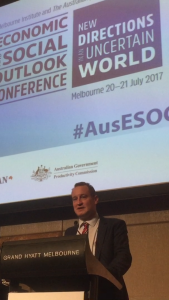