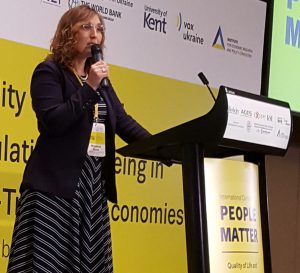 GLO Fellow Sergei Guriev (Chief Economist of the European Bank for Reconstruction and Development and Professor at Sciences Po in Paris) in one of his many presentations to the conference on Friday, September 2017. In 2004 – 2013, Guriev was a tenured Professor of Economics and Rector of the New Economic School in Moscow. He spoke about the “Happiness Transition” in Eastern Europe, discussed on a panel the role of international organizations for population wellbeing, commented on the interaction between religion and communism and spoke about “What prevents people in post Soviet countries to be happy?”. 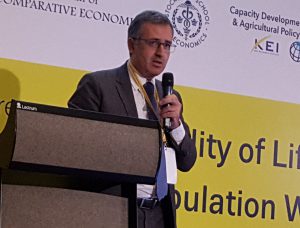 On the first day of the conference on Thursday, September 14, Klaus F. Zimmermann (UNU-MERIT, Maastricht University and President of the Global Labor Organization – GLO) had provided a keynote lecture on “Migration and Wellbeing”. He also chaired a policy panel on “Migration caused by conflicts: Wellbeing of refugees and internally displaced people”. 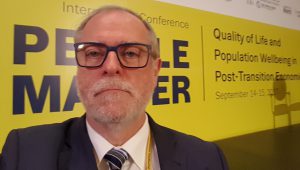 In his conference keynote on “Migration & Wellbeing”, Zimmermann dealt with the following issues:

(1) The Value of Mobility

(3) Measurement of Happiness and Wellbeing

(5) Migration and the Wellbeing of the Natives

(6) Wellbeing of Migrants and Conditions at Home

(7) Migrants Abroad and the Wellbeing of the Left Behind

His overview was based on the following key publications:

(5) Wellbeing of the Natives:

►W. Betz and N. B. Simpson, The Effects of International Migration on the Well-being of Native Populations in Europe, IZA Journal of Migration, 2013,2.

(7) Migrants Abroad and the Wellbeing of the Left Behind