Budapest, September 6, 2017.  At the Central European University (CEU), an outstanding institution of higher education under national political threat, the Global Labor Organization (GLO), the CEU School of Public Policy and the Section “Economics, Business and Management Sciences” of the Academia Europea (AE), had jointly organized a discussion panel meeting on the relationship between science and policymaking.

Evidence-free policy making is on the move. This is a particular challenge for the relationship between scientists and policymakers. A workshop with a high-ranked panel of scientists in Budapest engaged in policy advice and policy-making was debating this in the face of the ongoing discussion about the future of the Central European University (CEU). The open event took place on September 6, 2017 on the premises of CEU hosted by the CEU School of Public Policy. The distinguished panel of the event consisted of prominent members of the Academia Europaea (MAE) and the Global Labor Organization (GLO).

Andreu Mas-Colell, University Pompeu Fabra (UPF) and Barcelona GSE, MAE & GLO; Recipient of the Erasmus Medal of the Academia Europaea 2017; former Minister for Universities and Research and former Minister of Economy and Knowledge of the Government of Catalonia.

Sergiu Hart, The Hebrew University of Jerusalem & MAE;   Founding Director of the Center for the Study of Rationality. 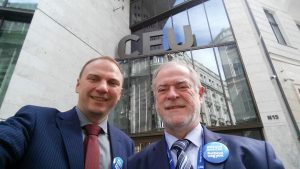 WE ALL STAND WITH CEU