From afar, Latin America looks like a blurry tableau: devoid of defining lines, particularities and nuances. Little is understood about the idiosyncrasies of Latin-Americans, their cultural identity and social values. Differences between Brazilians and Spanish Americans, or amid the diverse Spanish American countries, are not sufficiently understood. Even less is known about the amplitude of the Iberian heritage of such countries, or about the miscegenation and acculturation processes that took place among their different constitutive races. There is no clarity regarding the Western nature of Latin America or about its cultural affinities with Latin Europe. Nor is there sufficient understanding of the links between the Latin population of the United States and the inhabitants of Latin America.

This book’s aims to fill the gap by focusing on Latin America’s history, culture, identity and
idiosyncrasies. It serves as a guide to understand regional attitudes, meanings and behavioral differences of the region. It also analyses the present economic situation of the region, while trying to predict the future of the region. Written in a simple and accessible manner, this book will be of interest to readers keen on exploring the region for potential opportunities in trade, investment or any other kind of business and cultural endeavor.

Understanding Latin America: More information & How to order the book

GLO Fellow Alfredo Toro Hardy is a Venezuelan diplomat and scholar. Graduated in Law from the Central University of Venezuela with several master and postgraduate degrees from ENA, University of Paris II, Central University, the University of Pennsylvania and Harvard University. Career diplomat who has served, among other posts, as Director of the Diplomatic Academy of the Venezuelan Ministry of Foreign Affairs, and Ambassador to Brazil, Chile, the United States, the United Kingdom, Ireland, Spain, and Singapore. Director of the Center for North American Studies and Coordinator of the Institute for Higher Latin American Studies of the Simón Bolívar University (1989-1992). Elected “Simon Bolívar Chair Professor for Latin American Studies” by the Council of Faculties of the University of Cambridge for the academic year 2006-2007. Member of the Advising Committee of the Diplomatic Academy of London (2003-2008). Fulbright Scholar and Visiting Professor at Princeton University (1986-1987). Author or coauthor of 30 books and more than 30 academic papers on international affairs. 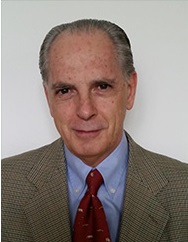