The American Economic Association (AEA), in conjunction with 58 associations in related disciplines known as the Allied Social Sciences Associations (ASSA), holds a three-day meeting each January to present papers on general economics topics. The event which is the largest meeting of academic economists in the world typically brings together more than 13,000 individuals from all parts of the world.  ASSA 2018 took place in Philadelphia on January 5 -7.

Many GLO Fellows were at ASSA 2018 to present their work and engage in academic exchange and informal meetings. GLO President Klaus F. Zimmermann (UNU-MERIT, Maastricht and Bonn University) was also present to discuss and develop GLO issues in many informal meetings and gatherings. One prominent issue of the conference dealt with: “Should Economists Make More Use of Direct Data on Subjective Wellbeing?”

The Nobel Laureate Luncheon on Saturday, January 6, was organized in the honor of Oliver Hart and Bengt Holmström. See Bengt Holmström speaking, Oliver Hart right; and from the left: Ben Bernanke, Daron Acemoglu and Olivier Blanchard. 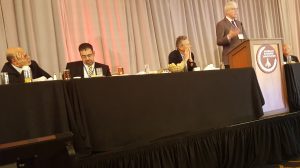 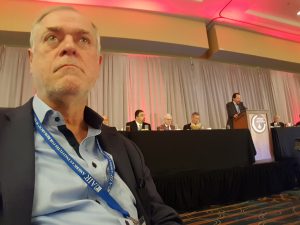