On December 8, 2017, GLO President Klaus F. Zimmermann met Andrew Leigh in his office in Canberra to discuss the merits of openness for Australia and the World, and the mission of the Global Labor Organization (GLO).

As Leigh and Zimmermann agree, global engagement has become a major political fault line around the world, where some argue that trade, investment and migration are threats rather than opportunities. The challenges to an open world are generated by global uncertainty, rising inequality and populism. In his book, Andrew Leigh argues that Australia’s past prosperity has been the result of engaging with the world, a view that complements the evaluation of global economic progress by the GLO President, and is in line with the GLO mission. Not less, but more openness is required in the future for capital, goods, and people to stabilize and foster prosperity. 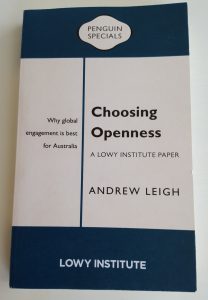 The two men after the discussion in front of the office of Andrew Leigh (left). 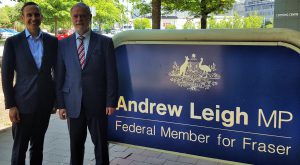